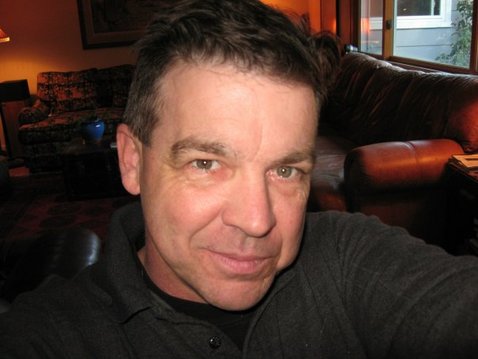 His piece, "Through the Black Forest" accompanies Kathy Burkett's "A Short Story about Things" in the fiction section of this issue. Here, we have the honor of this publication of his music.

Listen to Don Campau's "Action at a Distance"!

In 2008 I was invited to contribute a track for the third Cassette Culture Compilation ( www.cassetteculture.net) that was being curated by dAS of Big City Orchestra. I don't know what happened but that compilation never came out.

I had submitted a track that I originally recorded in 1997 and then remixed, edited and added to in 2008. This track was originally called "Non Attack Suite", and was a multi track guitar piece that I had used two, four track open reel recorders to make. They were separate machines so I recorded the tracks one by one and then synched up the two decks as well as I could and then mixed the results. The guitars were played by turning the tuning pegs randomly and I also used different speeds on the four track machine as I taped it.

In 2008, I took those existing tracks and recorded them to my digital 8 track. I overlapped, added effects and generally faded in parts of them from the original recordings.

This piece when finished was called "Action At A Distance" referring not only to the making of the piece but also the scientific physics paradox of non locality.

Musician, radio host and archivist, Don Campau has been active in music since 1969. From 1969-1974, Don, Geoff Alexander and other friends recorded as The Roots Of Madness, a bizarre, avant garde collective that released one record album in 1971. The early tapes are now also available as CDs.

In 1971 Don also began hosting a radio program on KTAO-FM in Los Gatos California under the mentorship of Lorenzo W. Milam, one of the founding fathers of community radio in the USA. This show incorporated ethnic, avant garde jazz, baroque, modern classical, early home recordings and outsider material.

From 1974-6 Don and Geoff owned Dogmouth Records, a retail outlet in Los Gatos that carried used and unusual LPs, many of which were rare and imported.

In 1978 Don began hosting a radio program on KKUP-FM in Cupertino, California. At the time, the show featured jazz, ethnic, contemporary classical, improvised and some early home recordings.

In 1985 the format of "No Pigeonholes" was established and became home recorded cassettes from the international home recording movement called "cassette culture". The music covered many styles from rock, folk, outsider, oddball, punk, electronic and much more.

Don continues broadcasting home recorded, small studio and independent music from around the world not only on KKUP but also throughout Europe on Radio Marabu and also on the net on The Luver.com

During this entire time, Don has also been recording his own albums. Most are home recorded rock songs but some releases are more experimental. In addition, there have been numerous collaborations with other home recording musicians worldwide.

The Lonely Whistle label was started in 1984 to house not only Don Campau albums but other releases from friends and musical associates.

On 1 August, 2009, Campau started the web site project, The Living Archive Of Underground Music, which gives his personal history of the cassette culture/ home recorded music movement. Many others have also contributed to this look back at the taping culture of the 1980s and 1990s.

Don Campau retired from his day job as a produce clerk at a grocery store in 2007 and lives in Santa Rosa, California with his wife, Robin O'Brien. He has 3 children: Nicole, Kevin and Caity and now 4 grandchildren: Mariah, Jack, Robert and Lilly.